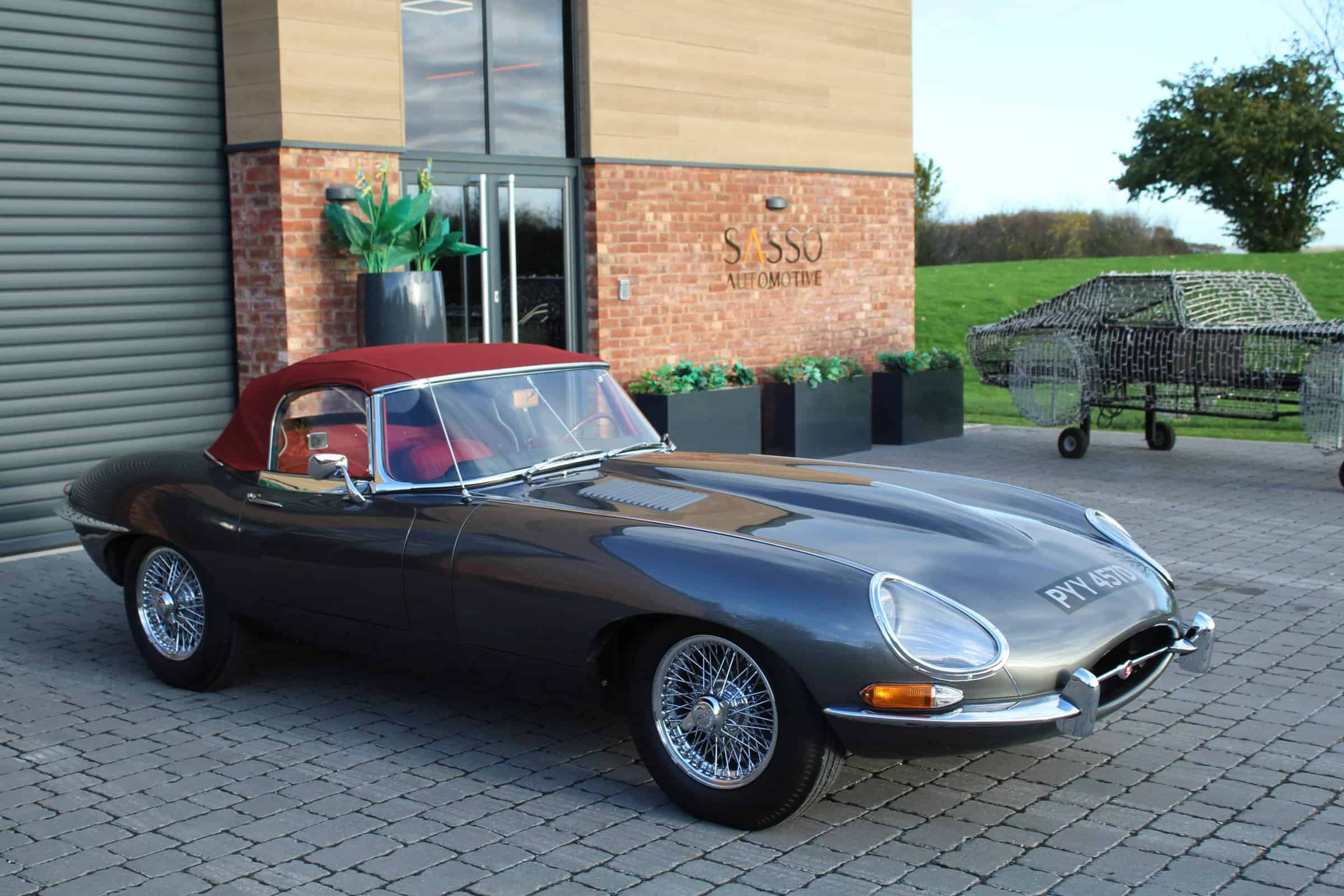 Stunning Jaguar E-Type Series 1 4.2 Litre (1965) Fully Restored  (Must be seen to be appreciated)

Launched at the 1961 Geneva Motor Show, the Jaguar E-Type 3.8 litre was nothing short of a revelation. With its heady blend of supercar performance, breathtaking styling and low price tag, the newcomer left rivals reeling and customers clamoring. Early sportscar racing success at the hands of Graham Hill and Roy Salvadori amongst others helped cement its reputation. Built as a monocoque with a front sub-frame to cradle the engine, the model’s combination of all-round independent suspension rack and pinion steering and four-wheel disc brakes gave it excellent road holding and handling capabilities. After that, the floors were dished to provide more leg room and the bonnet latches moved inside the car, whilst underneath the bonnet, the engine size increased to 4.2-litres in October 1964. Achingly beautiful yet viciously quick, the E-type remains for many the ultimate production Jaguar.

In March 2008, the Jaguar E-Type ranked first in the Daily Telegraph’s list of the ‘100 most beautiful cars’ of all time. It was initially designed and shown to the public as a grand tourer in two-seater coupé form and as convertible, on its release, Enzo Ferrari called it, “The most beautiful car ever made”. The model was made in three distinct versions which are now generally referred to as ‘Series I’, ‘Series II’ and ‘Series III’. The 3.8 litre engine was increased to 4.2 litres in October 1964 with a new 5.3 Litre, 12-cylinder Jaguar V12 engine.

This elegant and stunning specification Jaguar E-Type 4.2 Series 1 Roadster is a characterful British sports car, which has undergone a world class restoration, It is now ready to join a collection of iconic sports cars or be enjoyed as an engaging fair weather cruising companion and car show visits alike. The car we are pleased to offer for sale is a desirable Series 1 4.2 Roadster that rolled off the Coventry production line on the 24th December 1965. This matching numbers, left hand drive 1965 Jaguar E-Type Series I Roadster was supplied new to Dr. Gary Sapiro MD in New Jersey USA and remained in the Eastern States until being purchased and imported to the UK in 2012 from Philadelphia via New York.

In 2019, the car was sent to renowned Restorers Retroline where it underwent a full body off restoration. The project lasted over 36 months and consumed over 2,000 hours of labour of new or totally refurbished parts. Around 300 hours of this time was spent on shaping and fettling the body contours to ensure the E-type lines were as intended.

Almost 200 hours were then spent in the paint shop, carefully applying 4 layers of base colour before 6 further coats of lacquer. In between each stage, the body was hand flatted to ensure all blemishes were removed and a concours grade finish was achieved.

The engine was fully stripped and cleaned prior to a detailed inspection of the original components. The cylinder head was pressure tested and checked for dimensional accuracy before being reassembled with heavy duty springs for increased reliability. A modern fuel injection system was fitted, and original engine oil seals were uprated and replaced. The entire engine was then rebuilt to exacting standards to ensure smooth running and performance as well as reliability.

Finally, the car’s interior was retrimmed in high quality Italian Red leather. Just under 200 hours of labour was spent on producing and fitting this handmade, bespoke trim, achieving an exceptional award-winning level of finish.

The Series 1 E-types are by far the most desirable, with this particular example in its current condition this has to be one of the finest Series 1 4.2 roadster cars out there and not to be missed if you are in the market of this truly outstanding example of what is a Jaguar icon!  Visually stunning and fast, this Series 1 is surely one of the very best examples of Jaguar’s classic 1960’s sports car to come to market in recent years. Perfect, for runs down to Goodwood or worthy of an entry into many a classic car show, the extensive works undertaken in recent years ensure the cars useability truly match its beauty.