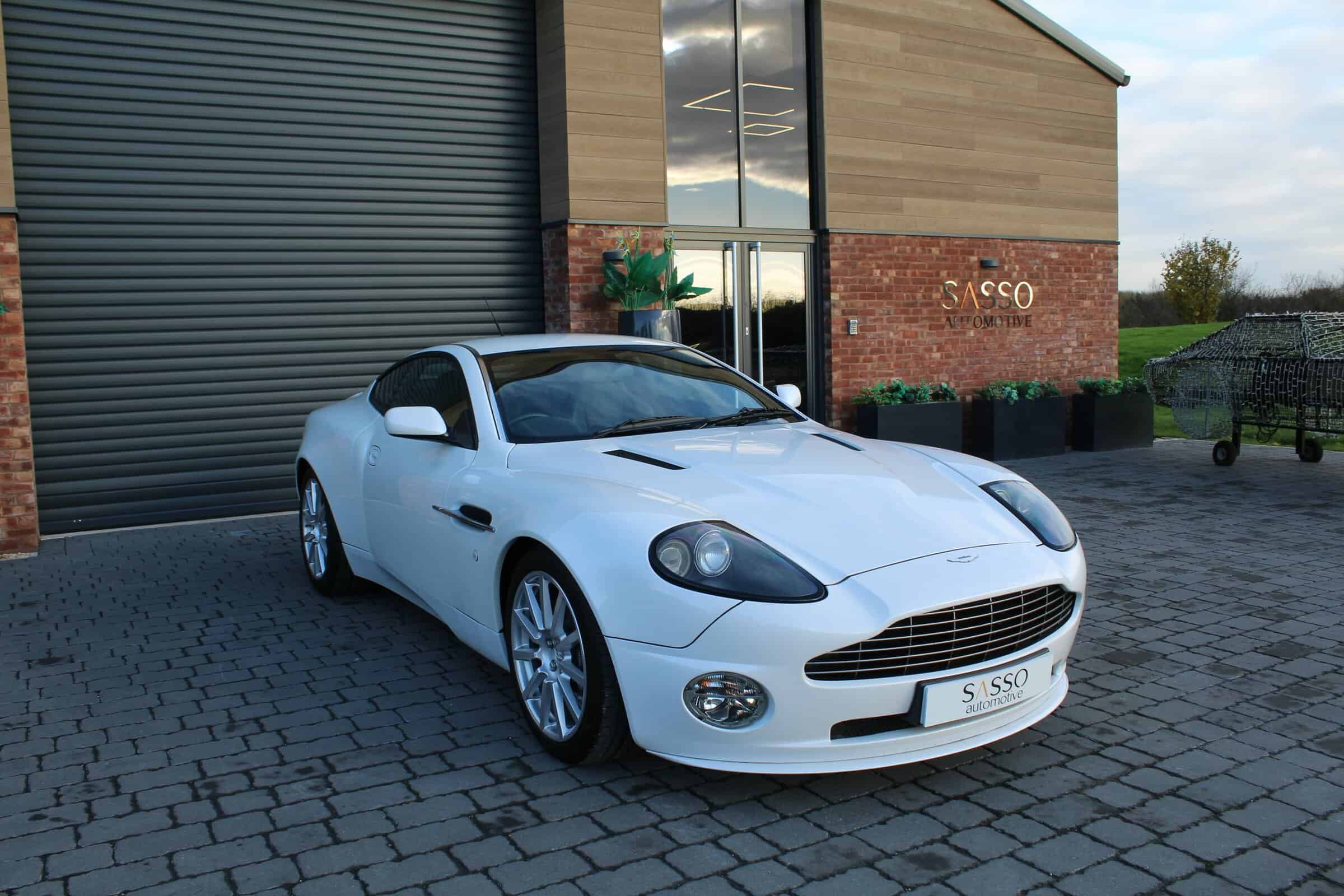 This Vanquish S was Commissioned and driven by Aston Martin’s CEO, Dr Ulrich Bez  also Featured on the cover of Evo Magazine & upgraded interior he also sent the car away to have a bespoke interior designed.

Aston Martin’s hand-built 6.0-litre V12 is renowned as one of the finest engines in the world: enormously powerful, smooth and beautiful. It can also lay claim to being the world’s best-sounding high performance car engine.
The Vanquish S was Aston Martin’s last model to be built at its Newport Pagnell factory and was also Ian Callum’s vision for the next generation of Aston Martin. At launch the Vanquish silhouette instantly became recognised around the world as it debuted as the James Bond car in Die Another Day.
Maximum power is 520 bhp (388 kW) at 7000rpm, with maximum torque of 425 lb ft (577 Nm) at 5800rpm. Top speed is more than 200 mph (321 km/h), the 0-62mph (100km/h) dash is accomplished in only 4.8 seconds while 0-100 mph (160 km/h) takes just 9.8 seconds.

An entirely new Aston Martin for the 21st Century, the V12-engined Vanquish coupé debuted at the Geneva Auto Show in March 2001. Styled by Ian Callum, the man responsible for the DB7, the Vanquish employed chassis-construction techniques more advanced than those of any contemporary road car, thus enabling the chassis engineers to develop suspension combining excellent handling and roadholding with unrivalled ride quality.

First seen in the DB7 V12, the 5.9-litre, 48-valve engine developed 460bhp. The six-speed gearbox was controlled by F1-style paddles and could be operated in either of two modes: fully manual or computer-controlled automatic, with a ‘sport’ setting available on both. The inventory of standard equipment included almost everything the connoisseur could wish for.  Offered here is an example of the revamped Vanquish S that superseded the original version in 2004. Chief upgrade concerned the engine, which now produced 514bhp, an output good enough to make the Vanquish S a 200mph car. The previously optional Sports Dynamic Pack of enhanced steering, suspension and brakes came as standard with the Vanquish S. Vanquish S production had amounted to 1,086 cars when the model was withdrawn in 2007.

This Vanquish S was originally built for Aston Martin’s then CEO, Dr Ulrich Bez, who is said to have stipulated that his car should be the sole example finished in Morning Frost. He must have relented, for a second car with the same exterior colour was built for him in 2007, while a small batch of similar cars was exported to the Middle East towards the end of production. Driven by Bez and occasionally used as a press car, this Vanquish S has been photographed frequently, featuring on the covers of evo magazine and many more.

Please contact a member of our team for further detail

Have your car looked after by our-in house detailers, who operate from our brand new bespoke detailing building. We provide Paint protection film, ceramic paint protection coatings, detailing, valeting and much more.