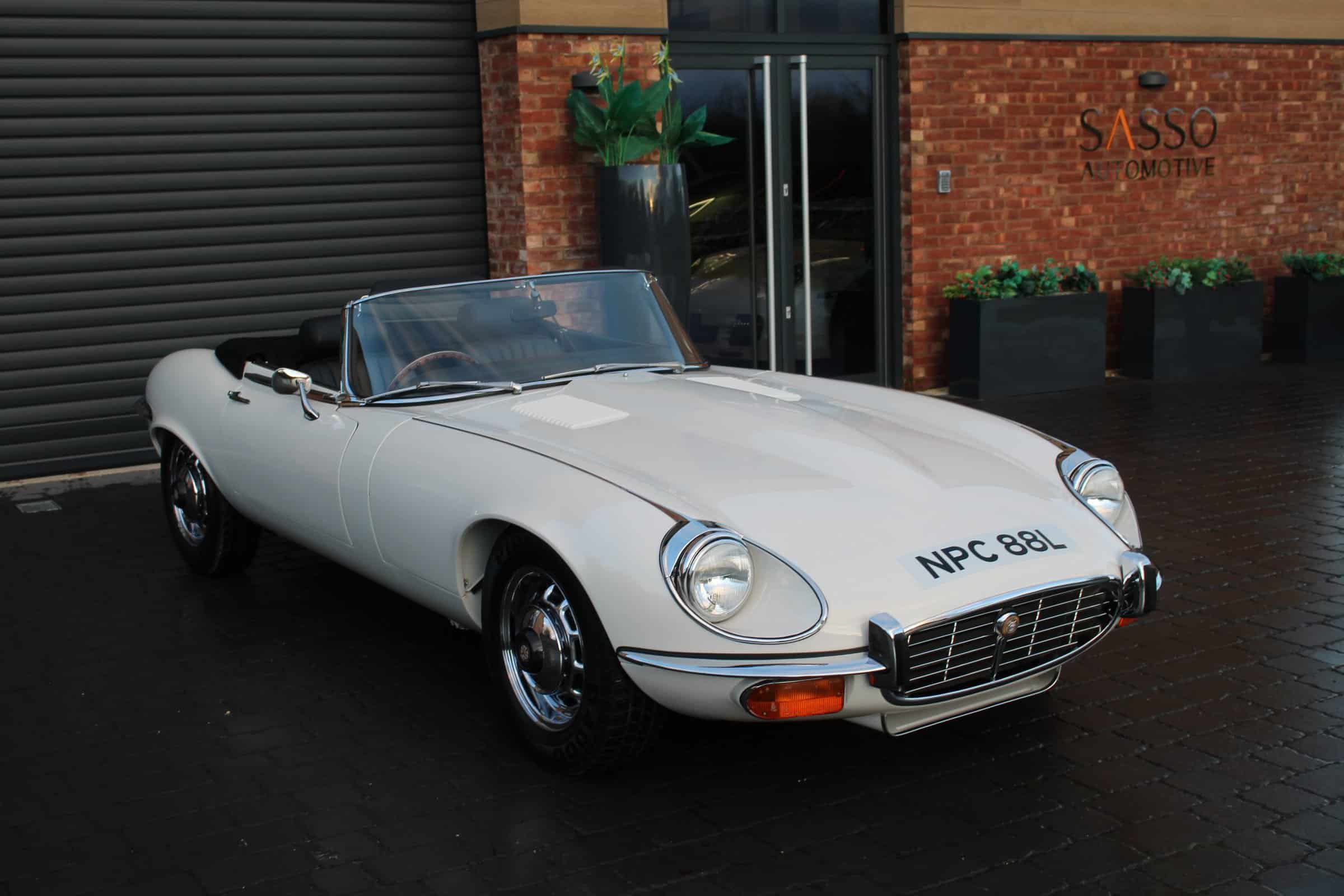 In March 2008, the Jaguar E-Type ranked first in the Daily Telegraph’s list of the ‘100 most beautiful cars’ of all time. It was initially designed and shown to the public as a grand tourer in two-seater coupé form and as convertible, on its release, Enzo Ferrari called it, “The most beautiful car ever made”. The model was made in three distinct versions which are now generally referred to as ‘Series I’, ‘Series II’ and ‘Series III’. The 3.8 litre engine was increased to 4.2 litres in October 1964 with a new 5.3 Litre, 12-cylinder Jaguar V12 engine then introduced with up rated brakes and power steering as standard for the series III. The short wheelbase fixedhead coupé body style was discontinued and the V12 was available only as a convertible and 2+2 coupé. The convertible used the longer-wheelbase 2+2 floorplan. By far the most comfortable and most accomplished of the range, these Series III’s were purpose built for long distances and certainly looked the part as well.

This elegant Jaguar E-Type Series 3 V12 Roadster is a characterful British sports car, which has undergone a huge restoration, It is now ready to join a collection of iconic sports cars or be enjoyed as an engaging fair weather cruising companion and car show visits alike.

A well-presented final-series example of the iconic and beautifully styled open-top sports car, finished in Old English white with Black leather.  Under the bonnet is the original 5.3-litre naturally aspirated V12, producing around 272bhp, coupled to a four-speed manual transmission. Manufactured in May 1972 and first registered in September 1972, it was originally sold through page Motors Epsom, Surrey.

This Jaguar E-Type Series 3 Roadster is a stunning example of the swansong for the marque’s iconic sports car and also benefits from a recent £80,000 restoration. Boasting a 5.3-litre V12 engine producing up to 272bhp, the S3 also came with uprated brakes and power steering as standard. In a right-hand-drive configuration, this UK-market car also has the manual gearbox for a more involving open-air driving experience.  The paintwork presents with a deep and glossy lustre, with straight panel work accented with good chrome detailing. The cabin has a full black leather interior, which has been re-trimmed, but which is the original factory colour.  Built on 25th May 1972 and dispatched to dealer Page Motors of Epsom, Surrey, this manual V12 roadster was first registered on 26th September to R.F Viola and retains its original Surrey registration mark. The history file supplied with the car contains a Jaguar Heritage Certificate confirming the car retains its matching numbers engine and was original colour with a blue interior. It rides on an original set of 15-inch chromed wire wheels with two-spoke spinners, shod with Dunlop SP Sport tyres. The factory specification includes a leather-rimmed three-spoke steering wheel, variable speed electric windscreen wipers, Smiths gauges, a Kienzle analogue clock, dual heater and ventilation controls, and manually operated windows.

The last owner made the decision to go about a no expense spared full renovation with some modern upgrades . Originally as on the Jaguar Heritage Certificate number 48468 this matching numbers vehicle was Old English White . The car was subject to a windows out bare metal repaint whilst at the same time the bodywork was treated to any corrosion being dealt with including replacement of body metal in specific areas . There was no need to replace any full panels which confirmed the previous owners expenditure and caretaker ship whilst in their care .

The interior and carpets replaced as well as some modern upgrades including a 5 speed gearbox , suspension overhaul , engine reconditioning , and numerous other works .

Now back to its original specification the car can only be described as one of the best available it drives perfectly, and looks stunning .

Have your car looked after by our in-house detailers, who operate from our brand new bespoke detailing building. We provide Paint protection film, ceramic paint protection coatings, detailing, valeting and much more.