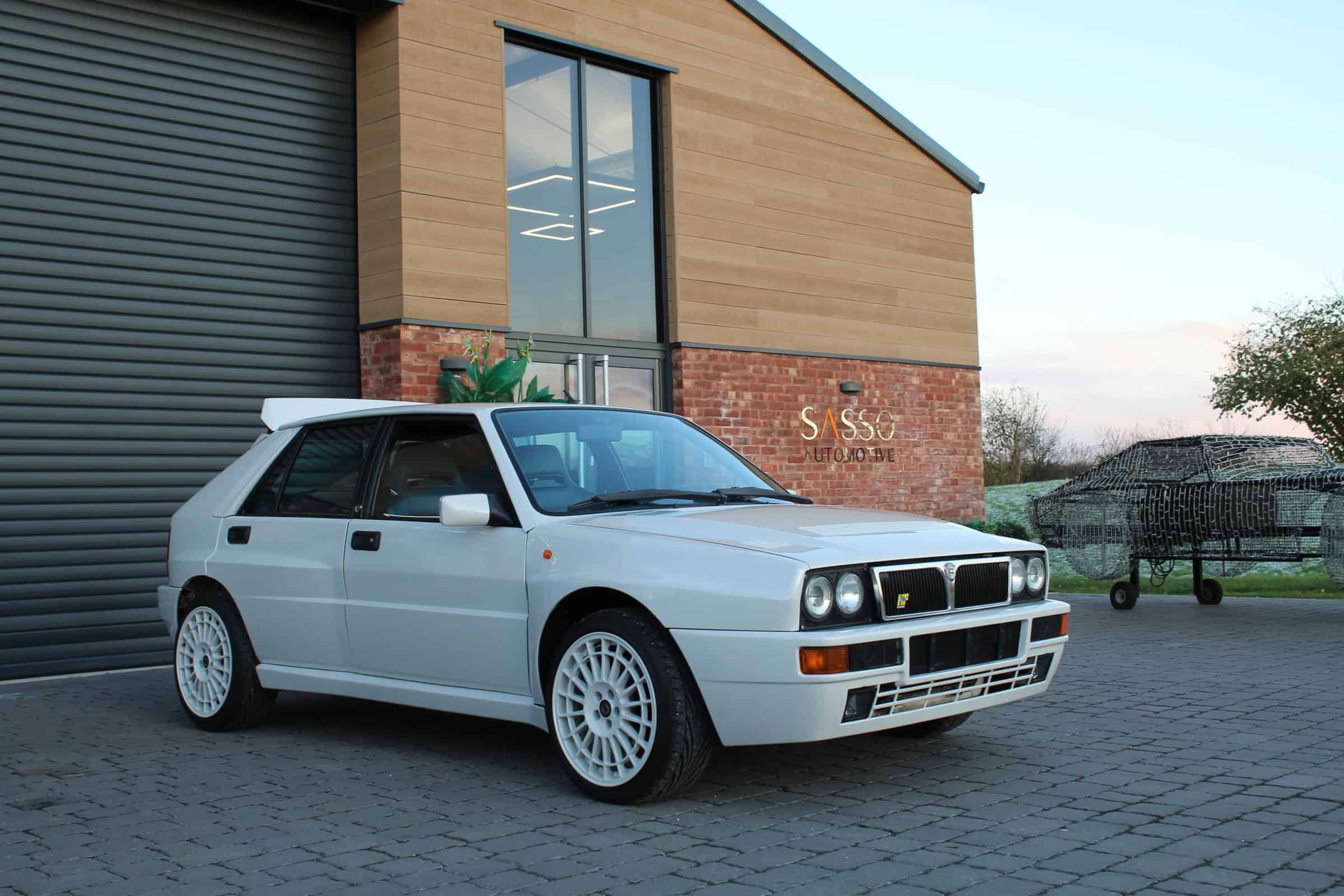 The Lancia Delta first competed in the World Rally Championship in 1987, following the ban of the dangerous Group B class by the FIA. The Delta HF 4WD was victorious on its debut outing at the 1987 Monte Carlo Rally and the model would go on to win six consecutive World Rally Championship titles between 1987 and 1992.  The model was continuously developed during that period and in 1991 the Delta HF Integrale 16V Evoluzione was introduced. The Evoluzione boasted better performance and handling as well as widened wheel arches and the addition of a spoiler on the back of the roof.

This rare ‘Bianco Perlato’ Limited Edition, is one of just 365 such cars produced and  is powered by an 2.0-litre turbocharged 16-valve four-cylinder engine which produces 215 bhp to all four wheels via a five-speed manual transmission. This Evo II is finished in the limited-edition colour of Bianco Perlato over a Blue leather interior, with matching dark blue carpets.

This Lancia Delta HF Integrale Evoluzione II ‘Bianco Perlato’ Limited Edition is a well-sorted example of the sought-after rally homologation special. Its solid service history, and impressive overall condition make this example a very usable addition to any collection. Famed for its sure-footed performance, and power on tap, this Integrale is ready to thrill on the open road with a wonderfully analogue driving experience. Arriving in June 1993, a further development of the HF Integrale naturally became known as the Evo II and featured an updated version of the 2-litre, 16-valve turbo engine producing a little more power (215bhp) and incorporated a three-way catalyst and a Lambda probe, with everything being organised by a new Marelli integrated engine control system. In addition to the mechanical changes, the Evo II received a cosmetic and functional facelift that included, new 16″ light-alloy rims with 205/45 ZR 16 tyres, a body-colour roof moulding to underline the connection between the roof and the Solar control windows, an aluminium fuel cap, air-intake grilles on the front mudguards, and a red-painted cylinder head. Based on both the Evo I and II, Lancia produced various limited editions and these cars were shared amongst its own dealer network. Naturally, with very low production numbers, they became sought after in period and even more so now. In particular demand was the Evoluzione 2 Bianco Perlato known affectionately amongst enthusiasts as ‘La Perla’. Only 365 were built worldwide finished in a beautiful colour combination with White Pearl bodywork and a blue leather Recaro interior including the Momo steering wheel.

This delightful example dates from 1994 and was delivered new to Parma in Italy initially, but was imported to the UK quite early in its life on 19/05/1998. Since 2017 it has been part of a private collection and had little use but the car is supplied with an interesting history file indicating that it has been well maintained throughout, with invoices from Walkers. Over £10,000 invested in the car between  September 2014 and June 2016. Supplied with the original book pack, service records, a host of invoices and older MOTs

Have your car looked after by our-in house detailers, who operate from our brand new bespoke detailing building. We provide Paint protection film, ceramic paint protection coatings, detailing, valeting and much more.